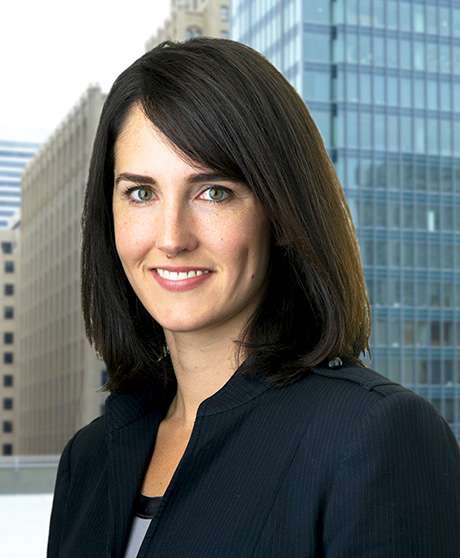 When she isn’t representing clients, Sara is a lecturer at Stanford Law School, co-directing the Trial Advocacy course.

She serves on the SFTLA Board of Directors and is a contributing editor of the Rutter Group “Claims and Defenses” Guide, which is a leading practice guide for lawyers in California. She also coaches mock trial at Stanford and serves as Co-Director of ABC (Attorneys Bettering the Community) a local nonprofit composed of attorneys who want to volunteer in a hands-on way.

"Sara Peters and her staff represented us when our mother was injured. These situations are complicated and they take a long time to resolve. Sara and staff were great communicators during the entire process. They were able to achieve a solution we are happy with. We encourage anyone needing legal help to speak with Sara Peters!"

"Khaldoun Baghdadi and Sara Peters represented my husband in a bicycle accident. They were both very attentive and patient…really such a pleasure to work with during one of the most difficult times of our lives. Khaldoun and Sara took the time we needed to explain the process, set our expectations and outline very clearly what was expected of us. I am grateful that a friend recommended them to us and it was such a relief to know we were being represented by people we could trust."

"Sara Peters represented me in a complex case that lasted over a year. She always helped me know what was going on —I could tell she cared. Also, from the outset, she did not sugarcoat the obstacles we faced, but kept me involved, and informed of the risks. I highly recommend using Sara and her team."

"Sara Peters and her staff represented us when our mother was injured. These situations are complicated and they take a long time to resolve. Sara and staff were great communicators during the entire process. They were able to achieve a solution we are happy with. We felt the legal expenses they charged were very fair and well earned. We encourage anyone needing legal help to speak with Sara Peters!"

She teaches CLE (continuing legal education courses) on litigation-related topics. She is an active member of CAOC (Consumer Attorneys of California), AAJ (American Association for Justice), and the Bar Association of San Francisco. Sara has been peer-nominated as a Northern California Super Lawyers Rising Star— a distinction given to fewer than 2.5 percent of the state’s lawyers.

Sara received her undergraduate degree in Philosophy and Middle Eastern Studies at UCLA, and attended Stanford Law School, obtaining her J.D. in 2008. She joined Walkup the same year.

(Negligence case against tour bus operator, on behalf of the family of a woman, struck and killed by bus)

(Premises liability case for defective hotel staircase, on behalf of a woman who tripped and fell down a set of stairs)

(Medical negligence case on behalf of a respected psychiatrist, for failure to diagnose her ovarian cancer, allowing it to progress to an incurable stage)

(Suit against taxi company, alleging it was liable for taxi driver’s vicious attack against passenger)

(Represented an oncologist who experienced a herniated disc in a minor impact rear-end collision caused herniated disc. The award was nearly double the insurance policy limits)