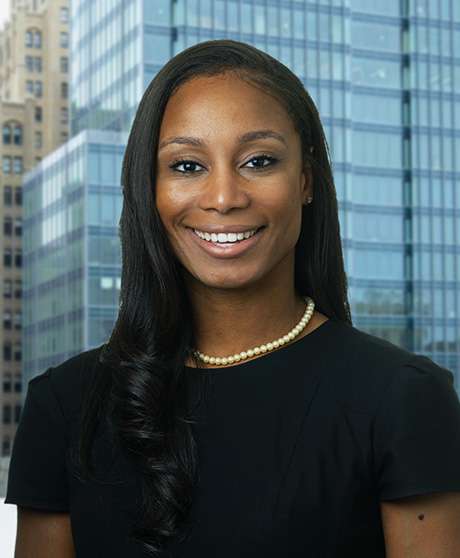 Jade comes to the Walkup firm with a deep rooted passion for civil rights and justice. It was Trayvon Martin’s murder in 2012 that compelled her to retire from her first career as a professional basketball player and apply to law school. She received her J.D. from the University of California, Hastings in 2017 and her B.A. in Criminology from the University of California, Irvine.

During her time at Hastings, Jade’s passion for civil justice directed her academic achievement and experiences.

Her conviction to use the civil legal system as an avenue to pursue justice extends beyond civil rights. Since joining Walkup in 2018, she has successfully represented families and clients that have been catastrophically harmed or killed in auto collisions, drug rehabilitation centers, medical facilities, by dangerous conditions on personal and public property, defective products, and more.

“From the start, Jade and the team at Walkup made me feel secure and even hopeful during a long and arduous recovery process. Severe personal injuries are traumatic, but dealing with insurance, your own and others, is its own beast. I am so fortunate to have been able to focus my energies toward healing and my day-to-day while my lawyers effectively fought for me.”

“I limped into Walkup to meet with Doris and Jade. Severe personal injuries are traumatic, but dealing with insurance, your own and others, is its own beast. I am so fortunate to have been able to focus my energies toward healing and my day-to-day while my lawyers effectively fought for me. I was never rushed, brushed aside, or otherwise made to feel like I was bothering anyone when I reached out. The professionalism from EVERYONE at Walkup should be the gold standard for how lawyers deal with clients, period.  I now have closure on a really dark time in my life. I know that would not have been possible without the caliber of representation I had."

During law school, Jade worked as a law clerk in the Civil Rights Enforcement Division of the CA Attorney General’s office led by Vice President (former CA Attorney General) Kamala Harris and represented low-wage earners in the Individual Representation Clinic and Workers’ Rights Clinic. She was a member of the Social Justice Concentration program where she successfully spearheaded a campaign that doubled the number of grants UC Hastings offers law students pursuing public interest internships, served as Senior Editor for the Hastings Law Journal, and was on the Executive Board of the Black Law Students Association.

She received multiple awards for academic excellence and exemplary leadership within the Hastings community including: the Nancy Stuart Public Interest Award, the Outstanding Contributions to the UC Hastings Community Award, back-to-back Public Interest Awards (2015-16 and 2016-17), and the Witkin Award for Excellence for earning the highest grade in Employment Discrimination.

Prior to joining Walkup, Jade was selected as a 2016 San Francisco Trial Lawyers Association Fellow, where she had the opportunity to work at two distinguished San Francisco personal injury firms. Following graduation, she interned at the San Francisco Public Defender’s Office.

Jade serves as a high school Lead Mentor in Richmond, CA supporting students interested in pursuing legal careers who come from backgrounds traditionally excluded in the profession. She’s often asked to speak and moderate panels missioned to increase diversity, inclusion and representation in the legal field.

In her spare time, she can be found playing pick-up basketball at the local rec center, or watching or attending any given sporting event.