California has one of the most progressive attitudes toward bicycle use in the nation. The state is full of bicyclists who commute, run errands or simply enjoy some recreational activity. The construction and use of bike lanes are becoming more common in the state, helping to promote biker safety. Unfortunately, people still incur bike injuries in California each year. In fact, 189 people lost their lives in bicycle accidents throughout the state in 2016, according to the California Department of Public Health.

All bicyclists can reduce their risks of injury-causing accidents by understanding their rights and responsibilities when it comes to using the state’s roadways and bike paths. If you or a loved one recently suffered harm in a bike accident and believe someone else could be responsible, you may be able to receive compensation for your injuries, pain, and suffering.

Contact the bicycle accident attorneys at Walkup Melodia Kelly & Schoenberger today to schedule a free review of your legal options. We offer our services on a contingency-fee basis, so you won’t pay unless we win a settlement or court judgment on your behalf. In the meantime, consider some important state and Bay Area laws that might come into play for your case. 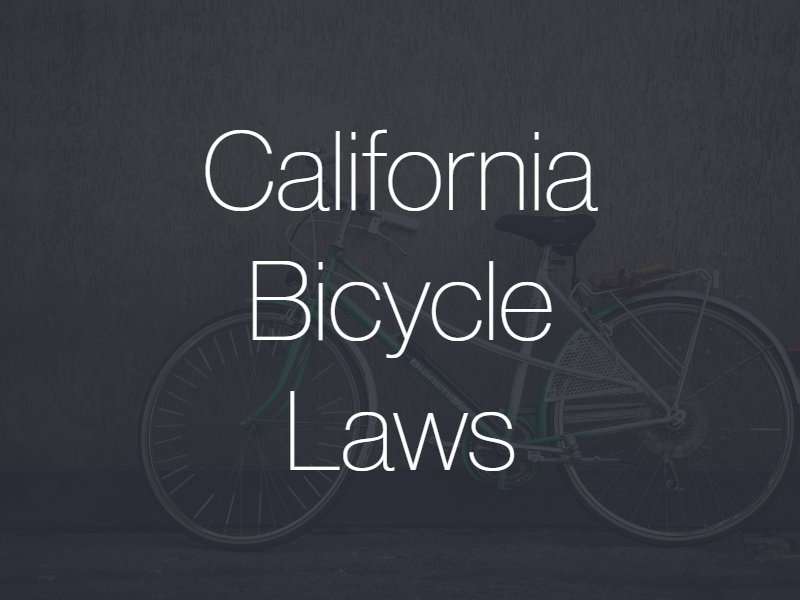 Relevant laws pertaining to bike use fall under the California Vehicle Code. These laws outline everything from the definition of a bicycle to proper use and conduct. Some of the most relevant laws governing bicycle use include:

Under California law, every person who rides a bike on a street or highway has the same rights and responsibility as someone operating a motor vehicle. This means he or she must obey all traffic signals, ride to the right (not facing traffic), obey posted speed limits and stop signs, and more. Further, motorists and bicyclists have an obligation to share the road, and each party owes a duty of care to the other.

VC 21200.5, Operating Under the Influence of Alcohol or Drugs

The law provides specific provisions for when a bicyclist operates under the influence of drugs and alcohol, separate from motorist’s laws. California holds that it is unlawful to operate under the influence of alcohol, drugs, or any combination. A person caught in such a state may face fines of up to $250. Those under the age of 21 at the time of the incident may lose their driving privileges for one year.VC 21201, Requirements for Bicycle Equipment

California sets certain minimum requirements for bicycles that operate on public roadways. These include:

Like motorists, an operator of a bicycle owes a certain duty of care to others on the road. The following rules may establish a bicyclist’s duty of care:

It is unlawful for anyone riding a bicycle in California to hitch rides on a motor vehicle by attaching themselves to any motorized vehicle on a public roadway.

Though it may be common, California code explicitly prohibits giving rides to passengers on a bike unless a permanent and regularly attached seat exists. Those under the age of four or those weighing less than 40 pounds may ride in an elevated seat that protects him or her from moving parts.

Every bicyclist operating on California’s roadways must leave on hand on the handlebars at all times. It is unlawful to carry a package that prevents a bicyclist from operating a vehicle safely.

The Bay Area has taken a progressive approach to install bike lanes throughout the city and along major area roadways. Knowing how to use these lanes is essential. Under California law, anyone who travels slower than the speed of normal traffic must use a bicycle lane if one exists, unless the following conditions apply:

If a bicyclist must leave a bike lane, he or she must wait until it is safe to do so and must give an appropriate hand signal to vehicles around to adequately warn of deviation from the lane.

Bicyclists must park their bikes in an upright position whenever it is possible to do so. An adequate path for pedestrian traffic must exist on the sidewalk, and a bicyclist cannot impede that. Local authorities may enforce local ordinances that apply to bicycle parking.

Similarly, it is unlawful for anyone, bicycle, or vehicle, to park in a way that obstructs the traffic of a designated bike lane or bike path.

California, like many other states, has a mandatory helmet law for minor cyclists. Anyone under the age of 18 who acts as a passenger or an operator of a bicycle must wear an approved helmet (meeting ANSI or SNELL standards). Those parents who violate the law may face a fine of $25.

Under this provision, anyone who rides a bicycle on a public roadway must ride in the direction of traffic. Riding against traffic is against California law.

Under California law, local authorities have the right to restrict or prohibit bicycle use along highways and freeways. If they choose to do so, they must post appropriate signage giving notice to bicyclists.

California law sets certain requirements to standardize the use of hand signals. Use the following indications whenever possible:

Unless specified otherwise, or except for a special permit from the California Department of Transportation, bicyclists should not use toll roads, unless the department indicates through a specific exception that they can.

It might be nice to listen to a podcast or music on a morning commute, but California law strictly prohibits the use of headsets or earplugs in both ears while operating a bicycle on a public roadway. Exceptions exist for authorized emergency vehicle operators and those who wear earplugs to prevent injury from loud noises. However, those who meet these exceptions must use earplugs that allow them to hear a siren from an emergency vehicle or a horn from another motorist.

The state does not have any comprehensive licensing requirements for owning or operating with a license. However, state law does allow local authorities the option of requiring licenses for bicycles, especially regarding use on public roadways.

If a municipality does enact a local ordinance regarding licensing, it is unlawful for any person to tamper with or otherwise alter any licensing markings visible on a bike.

Roadside debris can present a serious hazard to bikers. Under California law, it is illegal for any person, motorist, or passenger to throw items from a moving vehicle onto a roadway or adjoining area such as a bike path. This includes cigarettes, matches, bottles, cans, glass, wire, nails, paper, or any other substance that may cause injury or damage to passing bicycle traffic or pedestrians.

Have You Been in a Bike Accident in California?

The preceding laws set certain standards for bicycle use and conduct on California roadways. A basic knowledge of these laws can help bicyclists understand both their rights and responsibilities as they operate bicycles around the area. If you or a loved one suffered harm in a bike accident caused by another driver or dangerous road condition, consider seeking financial compensation from the negligent party. Contact the personal injury attorneys at Walkup Melodia Kelly & Schoenberger today to schedule a free review of your case today.