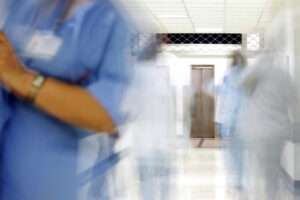 In our last post, we discussed the wrongful death of a Kaiser Hospital patient who was neglected by the nursing staff at the Oakland/Richmond Kaiser Foundation Hospital.

An investigation by the California Department of Public Health indicated that an overworked nurse with inadequate backup was preoccupied with other patients as a man was experiencing cardiac distress and dying down the hallway. The nurse failed to respond to 80 alarms in a five-hour period before the man’s cardiac monitor battery failed.

A new nurse eventually came during a shift change and noted the “change battery alarm” on the central cardiac monitoring screen. Unfortunately, the patient’s pulse was already gone when the nurse went to change the battery.

The new nurse attempted to revive the patient by performing CPR for 40 minutes. The patient eventually had a breathing tube inserted, but he was determined to be brain dead upon arriving in the intensive care unit. He had two subsequent cardiac events in the ICU and eventually died two days later.

Patient heart rates and vital signs are remotely tracked by the hospital’s cardiac monitoring system. The system is supposed to page nurses if a patient begins experiencing cardiac distress or low pulse rates.

State regulators found that an overworked nurse at the hospital neglected to respond to approximately 80 cardiac monitor alarms for the patient over a five hour period. In addition to alarms which indicated a high heart-beat rate, the nurse also failed to respond to alarms indicating a failing battery in the patient’s monitoring device.