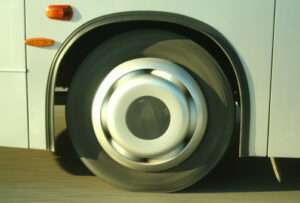 The Federal Motor Carrier Safety Administration recently issued a bulletin to motorcoach companies regarding weight limits on double-decker buses. Fully loaded buses can experience tire failures that lead to bus accidents like the Megabus crash that killed one and injured dozens in Illinois earlier this month.

“A tire on a motorcoach loaded beyond its weight rating and operated at highway speeds for a significant period of time is more likely to overheat and fail, potentially placing the safety of passengers and other motorists at risk,” the FMCSA advisory said.

Federal investigators have been monitoring motorcoach bus safety after a series of accidents this summer. There is evidence that low-cost motorcoach companies are more likely to skirt safety regulations and endanger passengers and others.

Megabus is at the center of most of the controversy regarding dangerous motorcoach buses after a disastrous summer of accidents. One Megabus caught fire in Georgia last week and another Megabus hit and killed an elderly pedestrian in downtown Chicago as well.

The most dramatic Megabus incident this summer was the Aug. 2 crash in southern Illinois.

Bus passengers said that they were on Highway 55 en route to Kansas city when a tire blew out, sending the bus veering into a large highway support pillar. A 25-year-old graduate student traveling with her parents was killed. A teen sitting behind the woman has already filed a lawsuit alleging that she was traumatized by seeing the University of Missouri masters student killed.

Federal investigators believe that the bus may have been overloaded at the time of the accident and threatened to immediate shut down any bus company found violating tire-loading restrictions.