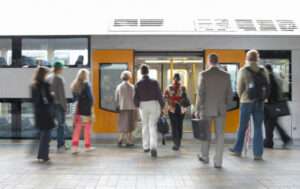 At least 39 people were injured Monday when an Amtrak passenger train collided with a truck while on its way from Oakland to Bakersfield. The train vs. truck accident happened near the farming town of Hanford and was severe enough to derail two of the train’s four cars and its locomotive.

Multiple agencies are investigating this accident although initial reports indicate that the truck driver went through the warning arms of the railroad crossing.

The truck driver suffered moderate injuries in the crash and the impact of the train was great enough to push some truck pieces inside the train. Luggage was also strewn throughout the scene.

It has not been determined if the truck driver will face serious criminal charges, but at least one California Highway Patrol spokesman said that serious charges are unlikely because the truck driver was sober when the crash occurred.

The spokesman added that the trucker doesn’t know how the crash happened, which is a common sign of a head injury.