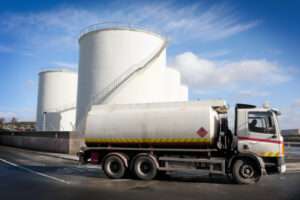 A Ventura County trucking company recently settled the personal injury claims of two car drivers and a police officer for $1.5 million. The plaintiffs in this case alleged that the trucking company was negligent in hiring a truck driver who was unsuitable to control these potentially dangerous vehicles, especially considering the type of cargo handled by the company.

The Oxnard trucking company specialized in delivering propane to area businesses and homes and had a policy of hiring criminals as truck drivers for cost-saving purposes. The owners of the company said that hiring ex-cons was economical because their drug testing costs are covered by the state of California.

One of the ex-cons hired by the trucking company had a well-documented criminal record of at least 25 arrests, including assault and battery. The owners of the trucking company admitted to not trusting the trucker. There was evidence that the trucker was mentally unstable and taking anti-psychotic medications for bipolar disorder, among other things.

The owners of the trucking company learned one morning that the trucker was not on his trucking route to Valencia and that he had stolen some propane tanks and money from an Oxnard area customer of the company. The owners then received a call from a grocery store where the trucker was seen wearing a Vikings football jersey and singing Prince’s “Purple Rain.” This is when they decided to call the police.

The police tracked down the trucker, who refused to pull the propane truck over and started a police chase. During the chase, the trucker sideswiped a car that was stopped at a red light, ran the red light and then hit a second car.

The dramatic chase ended at an area fast food restaurant where police surrounded the truck. The truck driver attempted to ram the police cars with his truck and was killed by a flurry of police bullets. During the shootout, an officer suffered a shoulder injury.

Lawsuits were filed against the trucker’s estate and the trucking company based on negligent hiring and entrustment, among other things. A settlement was reached, providing the driver of the parked car with $1 million, the injured police officer with $463,448 and the driver of the second car with $32,500.