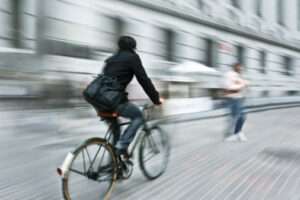 San Francisco is known as a national cycling leader. The city ranks third in the country for bicycle commuters, coming just behind Portland and Seattle. The number of bicycle riders has doubled in some parts of the city since 2002 and 3.5 percent of all trips in San Francisco are on a bike.

The growing number of cyclists on San Francisco roads, however, does have some downsides. City officials say that last year was the most dangerous year for cyclists in a decade. There were 630 bicycle accidents in 2011 that resulted in injury, up 5 percent from 2010.

Researchers from the San Francisco Municipal Transportation Agency (SFMTA) say that they do not know exactly why the rate of bicycle accidents has climbed, but they speculate that it has something to do with the increasing numbers of bikers on busy roads. SFMTA data indicate that bicycle counts in select locations have increased 71 percent since 2006, while collisions involving injuries have jumped 84 percent in the same period.

The severity of a car-bicycle accident varies depending on factors such as speed, helmet use and whether multiple vehicles are involved. Some cycling accidents involve catastrophic injuries to the brain or spine or even death.

San Francisco’s 2012 State of Cycling Report indicates that the vast majority of bicyclists practice safe riding behaviors to avoid collisions. Many bicycling accidents continue to be due to driver negligence and this discourages many residents from becoming cyclists.

“Many people do not ride because they are uncomfortable riding with cars,” the SFMTA said. “Residents feel most comfortable bicycling on bikeways physically separated from cars and in standard, striped bicycle lanes.”