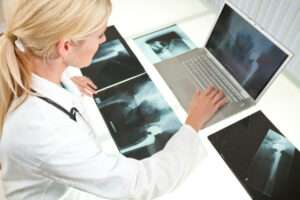 The case was tried by Walkup partners Mike Kelly, Matthew Davis and Khaldoun Baghdadi. There are currently thousands of pending DePuy ASR hip implant lawsuits. This verdict will be a great help all future plaintiffs.

After just five years on the U.S. market, DePuy Orthopaedics’ metal-on-metal ASR XL hip replacement system has injured more than 8,000 thousand Americans and led to as many as 10,000 lawsuits thus far. The first of these lawsuits commenced trial in late January in Los Angeles, and, as a result, previously sealed internal documents and corporate memos have now been made public in the trial helping to explain what went wrong with the DePuy hip implant products.

Numerous internal reports and documents demonstrate that DePuy and its parent company, Johnson & Johnson, consistently sought to increase sales of the now recalled hip seeking higher sales and profits. The company conducted laboratory testing on only one size of the device before marketing it, which was an insufficient amount of testing to determine whether the all-metal hip systems was safe. When high angle wear testing revealed the scale of the device’s problems, Johnson & Johnson concealed this information instead of warning patients and doctors.

When a patient walks, the two components should be in a state of lubrication so the metal surfaces never touch. Instead, because of design flaws the DePuy devices, the cobalt/chrome surfaces regularly wear directly against each other producing nanometrer sized debris flakes.

According to a growing body of evidence, this metal wear debris is responsible for tissue necrosis and cell death in the hip. The metallic particles can cause metallosis and damage to bones and tissue.

Although the ASR was only on the US market between 2005 and 2010, an estimated 93,000 patients received the product. Internal estimates by DePuy’s researchers concluded that 40 percent of these patients will experience a device failure within five years of the initial implant. This means that thousands of patients will suffer painful and potentially dangerous complications that require yet another otherwise unnecessary follow-up surgery to replace the original implant.

New information is surfacing as a result of the first ASR trial – and it shines an unflattering light on DePuy’s internal response to concerns about its products.

To begin with, the ASR failed DePuy’s internal safety testing as early as 2007. In this test, the ASR shed metallic particles as a result of excessive wear. This exact problem, excessive wear of metal debris, has injured many patients.

Despite its knowledge of the ASR’s likelihood to contaminate patients’ bodies with metal substances, DePuy did not warn doctors or patients of the amounts it knew would be produced, instead warning only of generic non-specific chances of metal wear.

DePuy officials had internal discussions about whether to fix the ASR by redesigning it. While the company kept aggressively marketing the device in the meantime, it ultimately decided not to pursue a redesign. This decision was made on the basis of economics according to the testimony of its marketing vice President Randy Kilburne.

Subsequent Studies Confirmed That The Hip Implants Are Dangerous

Shortly after DePuy discontinued the ASR, the company did another study, which was described by the New York Times as a “post mortem.” This analysis concluded that an early premarket design evaluation known as Design Failure Mode Effects Analysis was not done correctly, and that the evaluation of the ASR’s performance only at a single of potential implantation, was inadequate and unrealistic – surgeons often use a wide variety of implant angles to account for numerous individual patient characteristics. As a result, the DFMEA did not accurately capture how the ASR would respond in a real patient.

When tested at different implant angles, the ASR experienced much more wear- causing it to release larger amounts of metal debris.

The same internal study estimated that around 40 percent of all ASR recipients will experience a device failure within five years – meaning that many more patients will likely come forward with serious complications.

These new revelations point to one consistent theme: Like far too many medical device manufacturers, DePuy apparently put the opportunity to sell a new product ahead of adequate safety tests. If the company had disclosed more information to doctors and patients after its 2007 research, it could have spared thousands of patients from unnecessary complications.

Based on this trial evidence, it seems likely that DePuy will face significant liability for its ASR products. Any patients who suffer from complications or other ASR-related health problems are likely entitled to compensation.