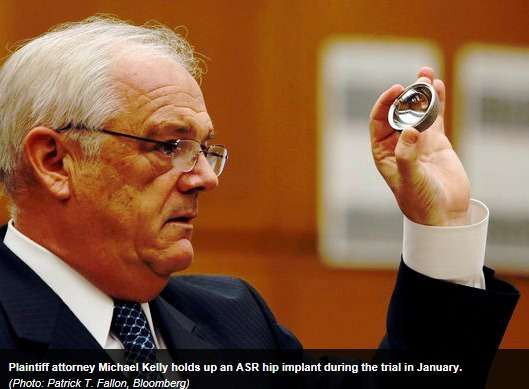 The law firms of Walkup, Melodia, Kelly & Schoenberger (San Francisco) and Panish, Shea & Boyle (Los Angeles) today reached a resolution of what was scheduled to be the first California “bellwether” trial of a failed DePuy ASR XL hip lawsuit.

The trial in the case which settled today, Ottman v. DePuy, was slated to start on October 15 in San Francisco Superior Court before the Honorable Richard Kramer.

The team of attorneys that was to try the case was the same group which earlier obtained an 8 million dollar verdict on behalf of the plaintiff in the matter of Kransky vs. DePuy in Los Angeles Superior Court last March. The terms of the settlement are strictly confidential and cannot be disclosed.

About 35,000 Americans were implanted with DePuy ASR devices between 2005 and 2010 (the date that the ASR was recalled). Doctors and medical device tracking registries, as well as design scientists, now predict as many as 50% of the patients implanted with the ASR will have to undergo a premature second operation, called a revision surgery, to remove and replace the defective ASR. Patients implanted with a DePuy ASR device who have not already retained a lawyer and would like to know what your legal rights are, should call 415 981 7210 or email mdavis@walkuplawoffice.com.

The Walkup firm is also representing patients who were implanted with the recalled Stryker Rejuvinate and Stryker ABG artificial hips. Patients implanted with one of these devices who are interested in learning about their legal options should also call 415 981 7210 or email mdavis@walkuplawoffice.com.