The Tragedy on Interstate 5: What Happens Next?

The Tragedy on Interstate 5: What Happens Next? 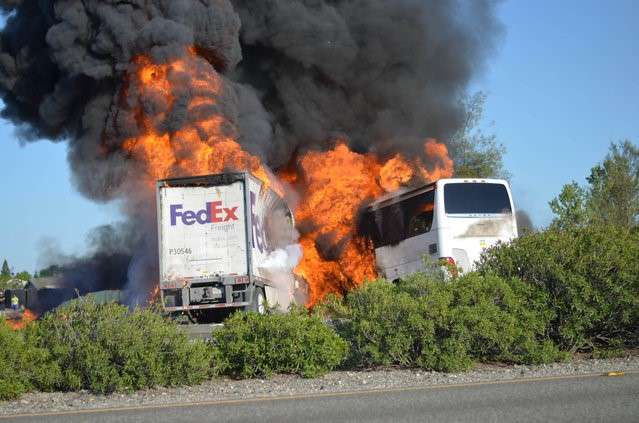 The grief brought upon the families of the young victims of yesterday’s I-5 crash is unfathomable.

Any caring person should have the survivors and families of those affected by this terrible tragedy in their thoughts and prayers. As lawyers involved in motor vehicle and trucking accident litigation we have seen how tragedies like this devastate families.

Collectively, the lawyers at Walkup Melodia have handled more than a thousand major highway collision cases involving injury and death over the last 55 years.

Because we are also parents, we know this tragedy has left a hole in the hearts of the victims’ families that will never heal. There is little that can be said to a mother and father who have lost a child.

In our vast experience, the injured survivors and the families of the dead will eventually want answers.

The CHP responded to the scene and the National Transportation Safety Board has sent a team to the site. Both agencies have skilled and experienced “major accident” investigative teams.

Ideally, the governmental investigators will immediately document and preserve all “perishable” evidence that may provide clues as to how this tragedy occurred, such as skid marks, wreckage, points of rest and witness statements while memories are fresh. Private investigators acting on behalf of lawyers retained by the families can also assist in the crucial fact-gathering process.

A combination of one or more of three things causes a highway accident: the people involved, the machines involved, and/or the crash site’s environment.

Both drivers died and will never tell their stories. The press reports, however, uniformly state that the Fed Ex truck crossed the median and struck the bus head on as it travelled in the opposite direction. This clearly implicates the truck driver. There is no information about how fast the bus was going before impact.

Fed Ex will certainly be named in the civil lawsuits as may be the operator of the tour bus, which is a “common carrier” under California law that owes the highest duty of care to the passengers. California Civil Code sec. 2100.

Black box and GPS data and witness statements may provide crucial information about the vehicles’ pre-accident speed and course. Autopsies may answer questions about both drivers’ health and sobriety.

The lawyers at Walkup Melodia Kelly & Schoenberger have handled many cases against Federal Express for vehicle collisions that have included allegations of improper driver training, as well as delivery practices that encourage driving at unsafe speeds. We have also handled numerous cases involving fatal bus accidents including a collision between a bus and another commercial vehicle, as well as an allegation of brake failure on a passenger bus.

It is possible that another vehicle or a roadway condition caused the Fed Ex truck to lose control. It is also possible that a tire or some component of the truck failed and caused it to swerve, or that poor design of the fuel system and fuel components led to the post collision fuel-fed inferno that took the lives of some of the occupants. These are product liability claims that may be brought against the vehicle manufacturers.

Crashes are a fact of life and therefore vehicles are supposed to be “crash worthy” and not explode when they do crash. Sadly, the massive size of the fireball suggests that some victims may have survived the crash but perished in the fire. There thus may be lawsuits against the makers of the truck and bus.

This terrifying photograph of the immediate aftermath, taken from SFGate.com, raises additional questions.

There will be questions as to how and why the vehicle could cross into oncoming traffic. The median in the photo above appears to be narrow and lacking a barrier. Did the roadway conditions at the crash site comply with the numerous standards and guidelines that are intended to prevent cross-median accidents?

What was the accident history here? Caltrans owns, built and maintains I-5, and the state agency may face liability under a “dangerous condition of public property” claim as described in California Government Code section 835.

Walkup lawyers have more than 50 years of experience in roadway cases, including all aspects of median divider liability on the part of Caltrans. This includes suing Caltrans on behalf of the husband and two teenage daughters of a woman killed in a cross-median collision on Interstate 80 in Fairfield, California. That case ultimately went to the Court of Appeal and created new law making Caltrans responsible when it deviates from its own design standards for safe median barriers.