Doris Cheng sworn in as President of SF Trial Lawyers Assoc. for 2015

Doris Cheng sworn in as President of SF Trial Lawyers Assoc. for 2015

Doris Cheng was sworn in as President of the San Francisco Trial Lawyers Association for 2015. She becomes the 5th member of the Walkup firm to serve in this position. Past SFTLA president’s from the firm have included James Downing, George Shelby, Daniel Kelly and Michael Kelly. She is shown in this picture receiving the ceremonial presidential gavel from outgoing SFTLA president Terry Coleman. 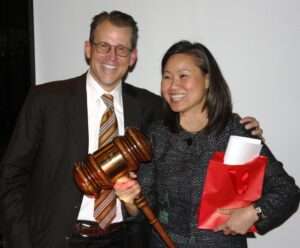