Study: The Most Dangerous Intersections for Pedestrians in San Francisco

Study: The Most Dangerous Intersections for Pedestrians in San Francisco

On October 4th, David Grinberg was struck and killed by a motorist near Golden Gate Park’s Panhandle at 5:22 p.m. – the third pedestrian death in as many weeks.

While San Francisco is said to be one of the most pedestrian-friendly cities in the United States (2nd only to New York City in walkability), the latest string of pedestrian fatalities helps prove that the opposite may be true: The City is one of the most dangerous places in the country for pedestrians.

From 2010-2016, there were 5,846 pedestrian collisions in San Francisco, leaving 130 dead and over 6,000 injured. In fact, over that same period 55 percent of people killed on San Francisco roads were pedestrians.

Where are San Franciscans and visitors to San Francisco most vulnerable as pedestrians? Walkup, Melodia, Kelly & Schoeneberger partnered with data visualization firm 1Point21 Interactive to find out.

The Most Dangerous Pedestrian Intersections in San Francisco

*PDI is the Pedestrian Danger Index, which takes the total collision, injury severity and fatality figures for each intersection into account.

Explore the data in our interactive map.

This map represents a visual distribution of pedestrian collisions across San Francisco. Larger circle sizes indict more dangerous intersections. Dangerous intersections within 250 feet of each other are grouped into zones. Larger zones represent areas of higher activity – that is, blocks with prolific cases of collisions, injuries, and fatalities.

A larger interactive version of the map is available here.

The largest and most collision heavy of these zones envelops the area on Market Street, from 7th street to Powell Street, all the way out to Geary and Leavenworth on one side and Howard and 6th on the other. In this heavily trafficked zone, 457 pedestrians were struck during the years studied.

Other notable zones include:

A Closer Look at Market Street

Based on our analysis, Market Street is clearly the most dangerous road for pedestrians in San Francisco. In fact, Market Street occupies 5 of the top 10 intersections on our list.

In particular, the 1.3-mile stretch from Van Ness to Montgomery accounts for more than a quarter of all collisions in SoMa, with the intersection of 5th and Market topping them all with 38 collisions from 2010 to 2016.

That specific intersection may give insight into the core problem on Market Street. According to the SFMTA’s 2012-2015 collisions report, the primary collision factors at this intersection were speeding and illegal turns by the vehicle – indicating that, a vast majority of the time, the vehicle was at fault for a collision.

To remedy this, there is a drastic plan in place to give Market Street a major overhaul. Dubbed Better Market Street, this project attempts to enhance the pedestrian safety of the major corridor in a sweeping fashion.

The proposed change includes a ban on all private transit vehicles on Market Street between 10th Street and the Embarcadero. Market would be reserved for public transit vehicles (such as the Muni), taxis, ambulances, and delivery trucks. The addition of Muni-only lanes and continuous, protected bike lanes would further serve to make this a pedestrian-friendly neighborhood.

With initial plans in place, The City hopes to break ground on construction by the end of 2018. However, funding has yet to be decided, along with any concrete plans for scheduling and deployment.

While Mission Street actually had more pedestrian collisions, Mission is more than twice as long as Market. With four different modes of transportation simultaneously occupying the road, Mission is also frequently the most congested road in the city, with a number of different dangers to pedestrians.

When this data is organized by neighborhood, there are three areas where pedestrians are clearly at higher risk of being struck. SoMa, the Mission District, and the Tenderloin stand out with 1397 collisions – nearly a quarter of all pedestrian collisions in The City. 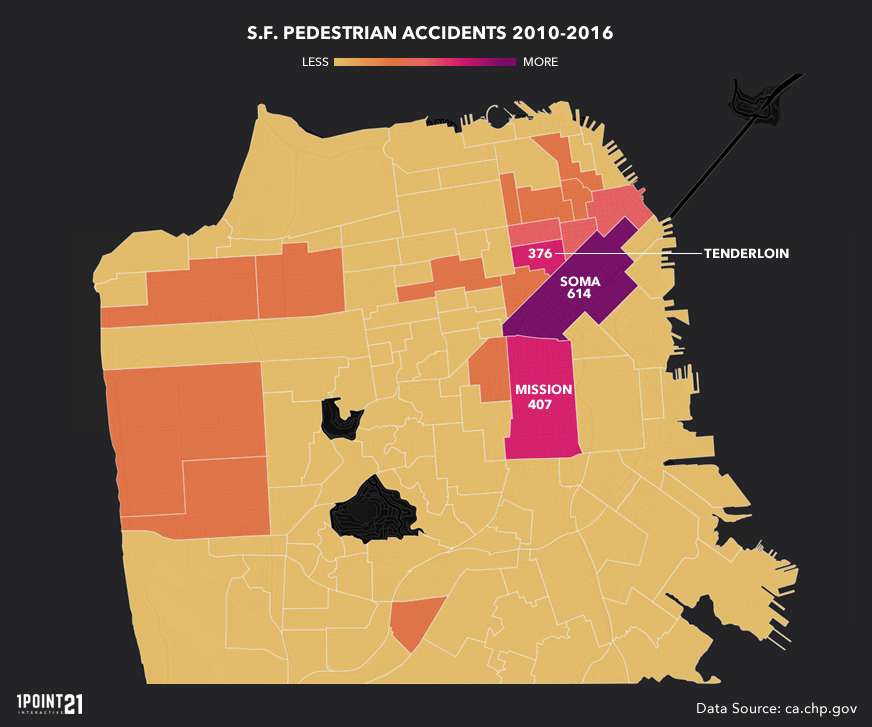 A pre-dominantly low-income neighborhood, the Tenderloin is also home to some of the most dangerous roads in San Francisco. Motorists typically speed through the cramped one-way streets, making this one of the most unsafe places to walk, but that problem is compounded by the difficulty of pedestrian visibility in the worn-down neighborhood.
As a result, The City proposed to improve pedestrian safety in the Tenderloin with a simple safety improvement project known as “daylighting.”
This safety measure essentially improves visibility at crosswalks, making it easier to see pedestrians crossing the street. By eliminating parking spaces within a minimum of 10 feet of a crosswalk or intersection, drivers are able to establish full visibility of the crosswalk with more time to slow down.
In 2015, The City improved 80 intersections across the Tenderloin with daylighting measures. It will be interesting to see what future effects they may have on both driver and pedestrian safety.

The Mission District notched 407 pedestrian collisions, the majority coming from Mission Street itself. Perpetually inundated with tourists, pedestrians, and motorists, the only road that tops Mission in terms of danger is Market Street.
It could even be debated that Mission Street is more dangerous than Market Street: from 2010-2016, Mission Street recorded 16 pedestrian fatalities. That’s more than 10 percent of all pedestrian fatalities in the entire city, and double the fatalities that occurred on Market Street.
This is no surprise to those who regularly travel through the Mission. Despite having constant congestion issues, the wide, sprawling road makes it easier for drivers to speed through intersections, while simultaneously making it more difficult to see pedestrians at crosswalks. Additionally, wider roads mean longer crosswalks, which can be a recipe for disaster for any slower pedestrians who aren’t able to cross in time.
Fortunately, the San Francisco Municipal Transportation Agency (SFMTA) has implemented a couple changes to combat these issues.
• The 14 Mission Rapid Project. An initiative undertaken to improve the safety and reliability of the Muni. Among other changes, one of the most impactful was the implementation of transit-only lanes along Mission to reduce congestion and improve Muni efficiency.• The implementation of “bulb-outs.” Also known as curb extensions, these additions to crosswalks at essential intersections narrow the traffic lanes at intersections. The result is lowered vehicle speed, increased pedestrian visibility, and shorter crosswalk travel distance.
It may be too soon to tell if these are making any noticeable effects on pedestrian safety, but it’s a step in the right direction.

SoMa topped the list with 614 collisions, and it’s easy to see why. The south of Market Street neighborhood is organized chaos at its finest, a constant mix of pedestrians, cyclists, motorists, and various public transit options.
Additionally, the neighborhood is a magnet for tourists and locals alike, due to its significance as both a cultural and business center. Attractions such as the Market Street cable car, the shopping mall, and Union Square are within close vicinity, while the Moscone Center frequently brings in business professionals, and tech giants such as Uber, Yelp, and LinkedIn have offices and/or headquarters within neighborhood lines.

What Can Be Done to Increase Pedestrian Safety?

Fortunately, it seems like The City is finally taking pedestrian safety seriously. Major projects such as Better Market Street are a drastic departure from the minor safety initiatives the SFMTA has accomplished in past years – a systematic redesign of a high traffic area that puts the safety of pedestrians first above everything else. This is a great step in the right direction, and may finally put The City on the right track.

In 2014, as a response to San Francisco’s traffic safety epidemic, the Vision Zero project was launched with a singular goal: reduce traffic fatalities to zero by the year 2024. This initiative has given us valuable tools such as the High Injury Network, a reputable voice for traffic safety issues, and has been the source of safety measures such as the Tenderloin daylighting project.

However, despite these changes, there do not seem to be any drastic improvements in pedestrian injuries or fatalities. Critics of Vision Zero state that this is likely due to safety initiatives that are half-measures rather than sweeping improvements – changes made as a compromise between pedestrian safety and other factors such as parking or flow of traffic.

Vision Zero is intended to be a sweeping transformation of San Francisco’s mentality on pedestrian safety. In order to gain ground on needless fatalities, the safety of pedestrians must be held in higher regard than the parking capacity of streets, or the speed limit of certain roads.