SAN FRANCISCO (July 9, 2020) — Walkup, Melodia, Kelly & Schoenberger is proud to announce that Super Lawyers has recognized Senior Partner Michael A. Kelly as the number one vote-getter on its list of 2020’s Top Ten Super Lawyers in Northern California.

Kelly also ranked among the Top 100 Northern California Super Lawyers in the Products Liability category for the 15th year in a row. Kelly has earned recognition as a Top 10 Super Lawyers for six of the last eight years. Annually, Super Lawyers distinguishes the top attorneys in California using a selection process which includes independent research, peer nominations, and peer evaluations.

The prestigious honor comes on the heels of Kelly’s work on two major pieces of litigation this year that will improve the lives of many Californians. Most recently, Kelly helped lead the litigation against the nation’s largest investor-owned utility PG&E, for damages to residents of six North Bay counties and Butte County caused by the utility triggering Northern California wildfires. The PG&E bankruptcy case, concluded recently on behalf of wildfire victims, is the largest Tort Bankruptcy in U.S. history – with overall payment to victims totaling $13.5 billion.

Kelly played an instrumental role in negotiating the fund that has been established to cover the victims’ losses. U.S. Bankruptcy Judge Dennis Montali issued final approval to PG&E’s Chapter 11 bankruptcy protection plan in May affirming its effort to cover liabilities stemming from its role in sparking the wildfires that killed 130 people and destroyed billions of dollars in property. This includes the most destructive wildfire in the state’s history, the 2018 Camp Fire, which destroyed the town of Paradise.

“Our firm has relentlessly pursued justice on behalf of wildfire survivors every day since the first fires in Sonoma and Napa in October 2017,” said Kelly. “This landmark Fire Victim Trust is now being funded and we hope that the process can quickly begin processing and paying claims, finally bringing some financial relief to victims who have been waiting nearly three years to rebuild” added Kelly.

In the litigation on behalf of Hastings College of Law, Kelly teamed with his colleagues at Walkup Melodia as well as principals at Greenberg Gross in Orange County to negotiate a tentative settlement aimed at resolving health and safety issues produced by a homeless encampment crisis in San Francisco’s Tenderloin District. The lawsuit, filed on behalf of residents, local businesses, and UC Hastings Law School, sought to compel the City of San Francisco to remove almost 500 tents obstructing the sidewalks of the Tenderloin and safely relocate the unhoused residents living on the sidewalks. At the same time, Kelly’s clients prayed for an order requesting the police and District Attorney to undertake an aggressive enforcement program to eradicate narcotic sales in the neighborhood. The stipulated settlement is currently before the San Francisco Board of Supervisors for approval.

“The city has already safely relocated the occupants of more than 250 tents pursuant to the stipulated agreement” Kelly noted. “We are hopeful that the Board of Supervisors will quickly approve the agreement so that the work can be finished and the neighborhood made even safer for both the housed and unhoused Tenderloin residents who deserve an end to drug trafficking and clean, appropriate sleeping locations off the public sidewalk. The injunction that is intended to conclude this case will protect both the indigenous housed population numbering more than 20,000 residents and those who are living on the sidewalks, improving the health and safety of all,” said Kelly.

San Francisco based Walkup, Melodia, Kelly & Schoenberger is one of the premier personal injury firms in the country specializing in the areas of personal injury and wrongful death litigation. Its attorneys have helped shape personal injury law while securing billions of dollars in financial compensation for injured clients. 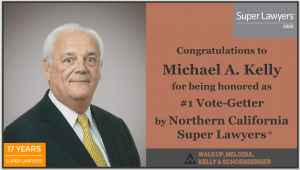