A team of Walkup attorneys prosecuting a landmark ride-share public safety case against Uber uncovered heretofore undisclosed evidence about the rideshare giant’s corporate policies in handling of reports of reported rapes. Some of his evidence was cited in a New York Times opinion piece article published last week: https://www.nytimes.com/2021/12/22/opinion/uber-safety-ride-sharing.html?searchResultPosition=1

Walkup team members Matt Davis, Sara Peters, Andrew McDevitt, Kelsey Constantin and Sarae Snyder represent a woman that was kidnapped and raped by Brandon Sherman, who was impersonating an Uber driver and who had an Uber decal on his windshield. In the course of their investigation they discovered that Sherman had been an Uber driver and had been accused by two different Uber riders of kidnap and sexual assault. As part of the currently pending lawsuit the Walkup litigators obtained shocking deposition testimony that Uber never reported any of Sherman’s previous crimes to the police because the company maintains an unwritten policy which strictly prohibits any Uber employees from reporting driver crimes to the police, even where the Uber driver admits to having committed a rape. Company employees have also admitted under oath that Uber does not disclose this policy to riders who report sexual assaults to the company, but instead leads the victims into believing that the company is in contact with the police. Uber employees have also admitted that the company does not include these assaults in reports it makes to regulators.

Uber deactivated Sherman as a driver after the second report of kidnapping and assault, but did nothing more to alert law enforcement or potential future victims. The company made no effort to retrieve its Uber decals from him even though it knew from regularly received reports that sexual predators were using Uber decals to pose as Uber drivers and had raped Uber riders. Rather than address the serious safety flaws in its rideshare operating platform, Uber blames the victims by alleging that such assaults have nothing to do with Uber’s wrongdoing because the assaulted riders got into the wrong car. Trial in this case is scheduled to begin in September 2022. 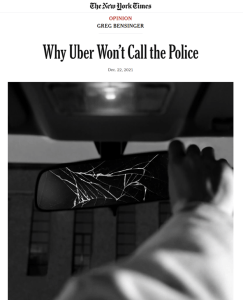