[Study] The Most Dangerous Roads in California

[Study] The Most Dangerous Roads in California

Every day, hundreds of people are injured in motor vehicle crashes on California roads.  While a crash can occur anywhere or at anytime, some areas of the state’s vast road network are much more dangerous than others.

Where do collisions and injuries occur most often?  Where are motorists at the highest risk of being involved in a crash?

What makes a road segment dangerous? A high volume of collisions and serious injuries.  In our analysis, dangerous road segments were ranked based on a collision index that weights both collision volume and injury severity.

Interactive Map: View the Most Dangerous Road Stretches in California

*This map is interactive.  Hover over each stretch to reveal more information.  Stretches colored with red are part of the top 12 overall, while a blue stretch indicates that it is the worst in the region.

The Most Dangerous Mile in California

In order to find the most dangerous five-mile segments, we started smaller and identified the single most dangerous mile in the entire state –  a one-mile stretch of CA- 110 between Olympic Blvd and 1st St in Los Angeles.  On this mile of highway, 12 people were killed and 1,968 were injured in 1,318 crashes.

While the total number of crashes and injuries may be shocking, no one who has driven on this road would be surprised that it encompasses the most dangerous mile in the state.  Knifing through downtown Los Angeles, this segment of road experiences heavy traffic and is bookended by major interchanges with I-10 and US – 101. 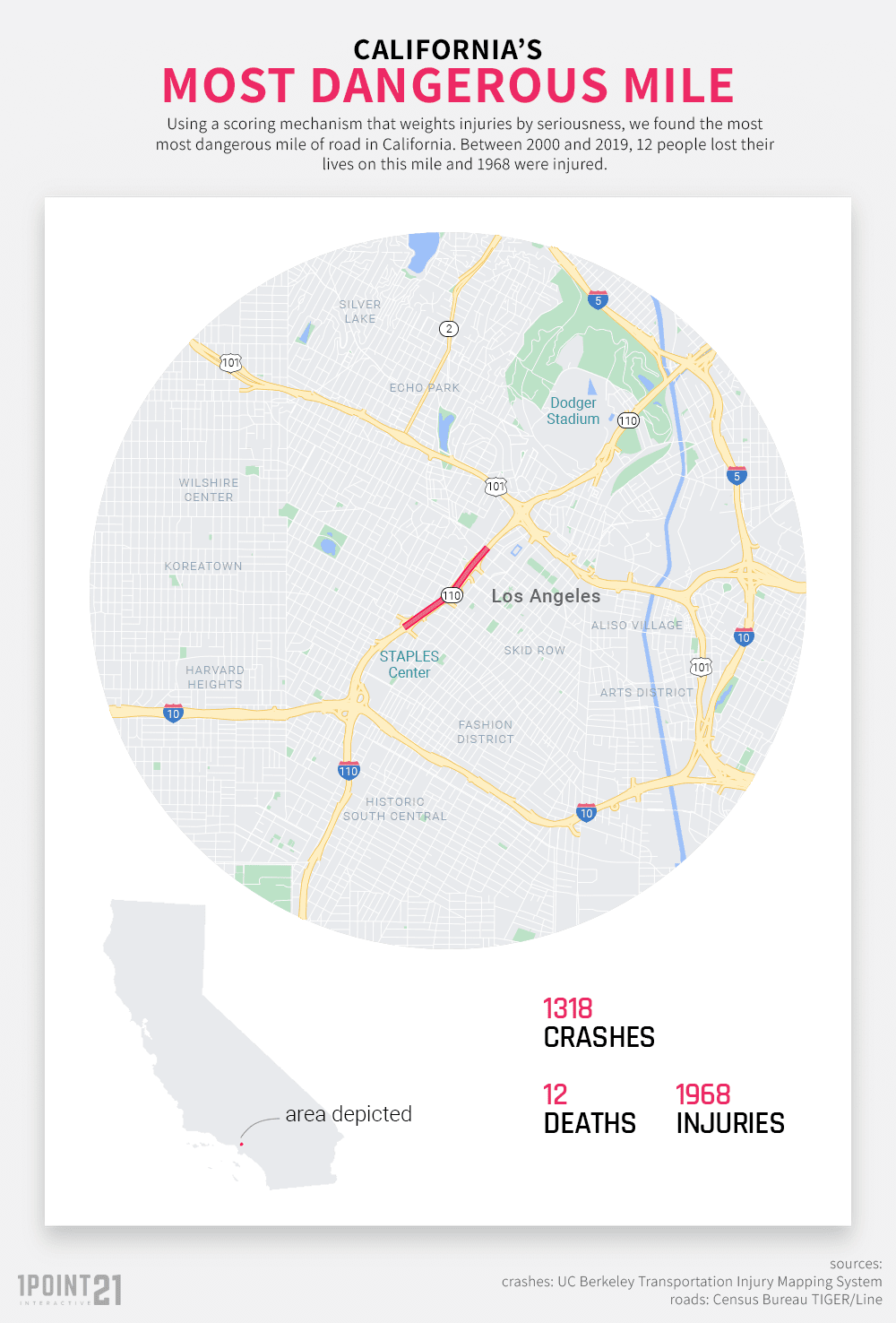 While our study examined crashes from a 10-year period from 2010 through 2019, this mile has continued to be extremely dangerous.  In 2020, a Caltrans worker was struck and killed by a hit-and-run driver in the early morning.  In 2021, two people were killed and several others injured after a vehicle traveling in the wrong direction of a northbound lane slammed head-on into another passenger vehicle.   In 2022, three police officers were injured in a collision on the southbound 110 near Olympic Blvd.

The 12 Deadliest Road Segments in All of California

After extending the segments to five miles, we found 12 that posed a significant risk to drivers. In total, there were 33,091 crashes on these 60 miles of roadway leaving 453 people dead and another 46,325 injured. These segments are clustered in four regions: four in the Bay Area – including the most dangerous segment overall, three in the Sacramento area, three in the Los Angeles area, and two in the San Diego area.

The most dangerous road segment in all of California can be found on I-580 in Berkley.  This road segment, known as the Eastshore Freeway, is, in actuality, a concurrency of both I-580 and I-80 that begins at the McArthur Maze  – a large intersection of four freeways – and ends in Albany just south of Central Avenue.  A hub of both commuter and long-distance traffic, this segment saw nearly 4,300 crashes, 58 deaths, and a total of 5,932 injuries during the study period.  This is an average of nearly 1.2 crashes and 1.6 injuries per day and nearly 860 crashes per mile!

Number two on the list is a section of the US-50 in Sacramento, spanning from just Drever St in West Sacramento59th St to Northgate Blvd.  Also known as the Capital City Freeway, this five-mile segment was the only other stretch that we identified to see over 4,000 crashes during the study period with 4,140 crashes, 54 deaths, and 5,802 injuries.  That breaks down to 828 crashes per mile.

Coming in at number three is a segment of the I-80 in the Bay Area.  This stretch actually begins where the I-80 and I-580 split from their concurrency and ends (and where our number one stretch changes direction) near San Pablo Dam Rd.  Despite having nearly half of the crashes of the two segments above it, this segment saw more deaths (66) than any other stretch – making it the deadliest road segment on our list.   In total, this road saw 2,360 crashes, 66 deaths, and 3,208 injuries.

The first Southern California entry on the list, this section of the 110 includes our deadliest single mile and begins at the US -101 intersection and ends near Vernon Ave.  This segment runs through downtown Los Angeles and is adjacent to three major sports arenas in Dodger Stadium, Crypto.com Arena (formerly Staples Center), and the Los Angeles Memorial Coliseum – as well as the entertainment complex of LA Live.  This five-mile stretch saw 3,573 crashes, 33 deaths, and 5,113 injuries and is the most dangerous stretch in Southern California.

Infamous for its heavy traffic, the 405 is one of the most well-known freeways in Southern California.  This segment of the 405 begins just before Wilshire Blvd in the northern and ends just after Braddock Dr.   This stretch of highway is home to heavy commuter traffic, cross-state traffic, as well as airport traffic, given its proximity to LAX.  Despite being the 5th most dangerous road, this stretch had the fewest fatalities of any segment in the top 12.  During the study period, there were 3,225 crashes, 17 deaths, and 4,448 injuries on this area of road.

The Most Dangerous Roadway in Each Region

California is the third-largest state in the U.S. and its regions are very different from one another.  The Bay Area, Sacramento Area, and Southern California areas are densely packed and the roadways see heavy traffic volume every day.  Other areas are more rural and more wide open.   Due to these facts, many areas in California did not have a road segment in our top 12.  While we believe that is a good thing, we also wanted to provide useful information to residents and motorists in all areas of the state.  For this reason, we also identified the most dangerous stretch in each region. 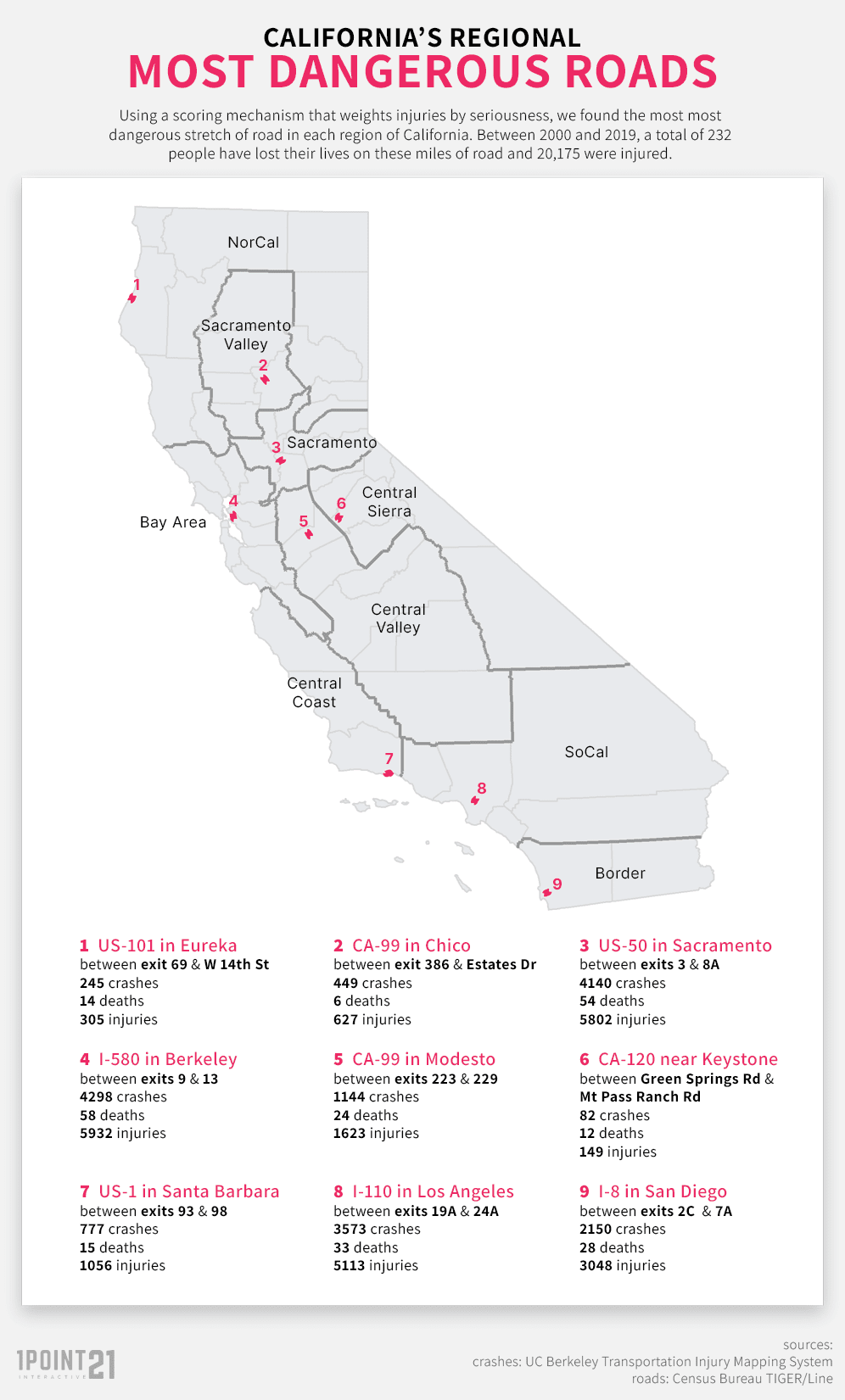 Table: The Most Dangerous Road Stretches by Region

How Can Readers Use this Information?

Ultimately, as an injury law firm, we hope that this information helps as many people avoid a collision and injury as possible. As the saying goes, knowledge is power.  For motorists, understanding where you may be at a higher risk of a collision can help you make decisions and take action to keep you safe.  This can include modifying your route to avoid a dangerous stretch or heightening your awareness when driving in these areas.  This information can also provide context to journalists when reporting on new collisions that occur in these areas and alert local governments and municipal agencies about areas where improvements can be made.

Methodology and Fair Use

Crash data was sourced from the California Highway Patrol’s SWITRS program, while road data comes from the U.S. Census Bureau via TIGER/Line.  Our scoring methodology put heavier weights on fatalities and severe injuries.

If you would like to republish or report on the results of our study, please link to this page to reference the source.  All images, data, and maps may be used with proper attribution.