Daily Journal recently profiled the significant result, finalized in San Francisco County Superior Court in September. The case involved a civil lawsuit against former company executives for a breach of fiduciary duty and a failure to inspect or maintain equipment.

The litigation stemmed from PG&E’s landmark $13.5 billion settlement with the fire victims and their families in 2019, which plunged the utility into bankruptcy. As part of the Chapter 11 reorganization plan, the PG&E Fire Victim Trust was created to distribute the monies owed to more than 40,000 citizens.

In the wake of a criminal conviction against PG&E that involved 84 counts of involuntary manslaughter, investigators determined systemic problems with company oversight of its aging powerlines, failure to maintain vegetation around electrical equipment properly, and failure to install power shutoff equipment before the 2017 fire.

Last year the Victim Trust sued 20 former PG&E officers and directors for failing to act in the best interest of the utility company.

“These deadly and disastrous fires could have been prevented if the defendants implemented safeguards, had properly inspected and maintained equipment, and complied with their fiduciary duty,” said plaintiff attorney Michael A. Kelly. “The funds from this settlement will go towards helping victims rebuild their lives.” 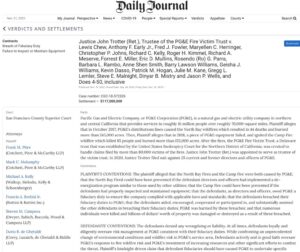