Study – The Most Dangerous Areas for Cyclists in Santa Clara County, 2014-2018

Santa Clara County has a deep appreciation for bicycling. It’s a region where Silicon Valley tech startups and outdoor enthusiasts alike enjoy cycling through the area’s many picturesque hills and neighborhoods. However, despite the prevalence of bicycles in Santa Clara County, bike-friendliness in many of its cities has only marginally improved at best, and major traffic accidents remain a serious problem.

We wanted to figure out the extent of danger cyclists in Santa Clara County were encountering on a daily basis, so we turned to data visualization firm 1Point21 Interactive. With their assistance, we conducted a special analysis of bicycle crash data in Santa Clara County from 2014-2018 from the California Highway Patrol.

In this data, we noted any particular clusters of roads, streets, and intersections with a high incidence of bicycle collisions, highlighting them as “danger zones” on an interactive map. The result is a map of the most dangerous zones for bicycles in Santa Clara County.

According to our study, we found 361 zones where three or more bicycle collisions occurred within close proximity of each other.

The following is an interactive map of all these zones, along with a list of the 25 most dangerous zones in the county – all ranked by a proprietary weighted safety scoring system.

Each yellow bubble represents a bicycle collision, while the bicycle danger zones are in red.  Our map is interactive, zoom in and hover over each zone to reveal more information.  If using a mobile device, rotate for the best experience.

The 25 Most Dangerous Places for Cyclists in Santa Clara County

According to our study, the most dangerous zone is a few blocks of downtown Palo Alto, the approximate epicenter being at Waverley Street and University Avenue. This cluster of streets and intersections was home to 49 total bicycle crashes, leading to 41 total injuries – by far the highest number of injuries and crashes on our list. For comparison, the next ranking zone had nearly a third less crashes and injuries.

Interestingly, Palo Alto is largely considered a bicycle-friendly city, with various modern accommodations to ensure the safety of their cyclists. This includes:

Unfortunately, the zone in question lacks many of these amenities for cyclists. Although it is a lively neighborhood with a village-style atmosphere, littered with eateries, retail stores, and notable places for folks to socialize, the narrow two-lane roads and limited parking makes this an unaccommodating neighborhood for both cyclists and motorists alike. 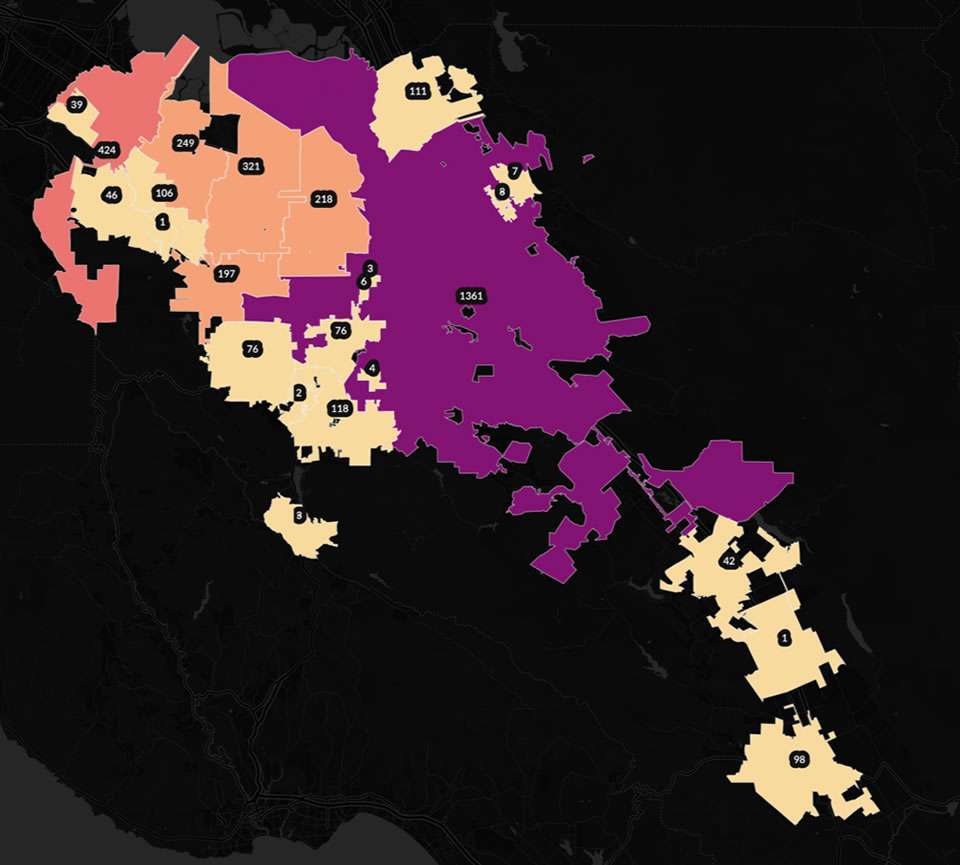 Categorized by city, our analysis yielded some interesting findings.

San Jose ranked the highest across the board for all qualifiers used in this study. The largest city in Santa Clara County (and 3rd most populous in California) had nearly three times more bicycle collisions than the next largest city, Sunnyvale. These collisions led to more injuries, severe injuries, and deaths than the top five cities in the county combined.

According to our analysis, San Jose had the highest number of dangerous zones in the top 25 list. Many of the zones were concentrated in the downtown area of San Jose, with some of the largest zones neighboring San Jose State University. This includes:

As mentioned previously, Palo Alto is widely considered the most bike-friendly city in the county – and arguably one of the most in the state, if not the nation. It is certified as a gold-level bicycle-friendly community by the League of American Bicyclists, and it boasts the first bike boulevard in the United States.

However, despite an improved bicycling culture and the accommodations made throughout the city, it still retains a high number of bicycle collisions and injuries. 5 of the top 25 most dangerous zones are located in Palo Alto, including the aforementioned most dangerous zone. These include:

Sunnyvale Had Two of the Most Dangerous Zones

One of the major cities in tech-heavy Silicon Valley, Sunnyvale had the third-most total bicycle crashes in Santa Clara County. However, despite being third, the city only had 2 dangerous zones in our top 25.

The most dangerous zone is tied for 15th in our rankings, centered on East Evelyn Avenue and South Sunnyvale Avenue. Home to 10 total crashes leading to 11 injuries, this zone is within the vicinity of notable city landmarks such as the picturesque Plaza del Sol and Historic Murphy Avenue. Additionally, a train station nearby may contribute to increased foot traffic – and therefore an increased chance of bicycle accidents in the area.

Home to the “Googleplex,” the headquarters of tech giant Google, Mountain View was fourth in total bicycle crashes in Santa Clara County – with 2 dangerous zones in the top 25.

The zone with the most bicycle collisions was located nearby Rengstorff Park, a predominantly residential area off North Rengstorff Avenue and Central Expressway. Ranked 11th, these 12 total crashes and 11 total injuries may have occurred due to the wide intersection, the railroad tracks nearby, and heavy residential foot traffic.

Santa Clara’s Most Dangerous Zone is in Koreatown

Although the city of Santa Clara had less than a seventh of the total bicycle crashes as San Jose, one of its two zones in the top 25 was uncharacteristically dangerous.

Located in the Koreatown neighborhood bordering nearby Sunnyvale, this zone located at El Camino Real and Helen Avenue ranked 8th. Although it had only 9 total crashes, those led to 1 fatality and 7 total injuries – 3 of which were severe. This could possibly be explained by the lack of traffic signals at a pedestrian crossing of a major road where the speed limit is 40mph. The addition of a new pedestrian crossing indicator at this crosswalk may curb collisions, but we suspect further modifications must be done in order to reduce crashes here at a significant level.

Arterial roads and expressways are notoriously unfriendly for both bicycles and pedestrians. With roads as wide as ten lane across and traffic flow that seemingly prioritizes high speeds over safety, these streets are essentially freeways that pass directly through vulnerable residential, city, and urban neighborhoods. Many of these pass through notable contributors to high traffic, such as shopping malls, city centers – even high schools.

Even though some of these roads have bike lanes that are shaded in their signature green, the sheer size of these roads may counteract the efforts to make them more friendly to cyclists.

There are other significant insights in our study – especially regarding some of the other dangerous zones in our findings.

Although Los Gatos is ranked 8th in Santa Clara County in total bicycle crashes, it has one significant zone on our list. This cluster, located at Los Gatos-Saratoga Road and North Santa Cruz Avenue, is the 4th most dangerous zone in Santa Clara County – the site of 17 total crashes leading to 14 injuries, 2 of which were severe.

This quaint stretch of Santa Cruz Ave has a number of notable retail stores and eateries, with a narrow road with one or two lanes each way. However, despite a small-town feeling on this stretch, it is decidedly unaccommodating for cyclists, with little to no signage and roadsharing for motorists and cyclists.

All of Cupertino’s Most Dangerous Zones Are Near Apple Campus

Despite being a relatively small town in Santa Clara County, Cupertino is most well-known for being the home of Apple. Unfortunately, with that fame can come unfortunate results: according to our study, there were two dangerous zones in the city that ranked in our top 25 – and both were in close vicinity of 1 Infinite Loop – the Apple Campus formerly known as the official headquarters of the tech giant. This includes:

The increased traffic for tourists looking to visit Apple Campus, along with cycling being a prevalent pastime among Apple employees, may contribute to these findings. However, further investigation is required to determine why so many crashes occur at this zones.

Santa Clara County has made significant efforts to improve the safety of their many cyclists. However, often these changes take time, as motorists and cyclists acclimate to the changes in signage and overall driving culture.

In many cases, a sweeping change in transportation culture and mindset may be required in order to enact significant change. For example, many these cities have implemented Vision Zero initiatives in order to push themselves toward an attainable goal for traffic safety. However, this goal does not happen without an institutional change in the foundation of a city’s mindset surrounding transportation and commuting.

This requires more significant improvements and changes to a city’s infrastructure. Other cities have removed parking spaces in the most bustling neighborhoods in favor of dedicated bike lanes. And still others have even resorted to closing off some of their most cyclist- and pedestrian-heavy roads and downtown neighborhoods to all cars.

An argument has been made that it takes this kind of drastic effort in order to make a positive impact toward zero traffic fatalities. It will be interesting to see Santa Clara County’s progress as they consistently and continually make proposed improvements to traffic safety – particularly with cyclists and pedestrians in mind.