[Study] The Most Dangerous Pedestrian Intersections in San Francisco

[Study] The Most Dangerous Pedestrian Intersections in San Francisco

On March 31, 2021, a 74-year-old man crossing the intersection at San Bruno and Masson Avenue was struck by a vehicle, and died. On May 18, 2021, a 29-year-old woman was killed in a similar way at the intersection of Hayes and Polk Streets – marking the eighth pedestrian death this year in San Francisco.

At Walkup, Melodia, Kelly & Schoenberger, we identify this as a serious issue. In the past, we have worked with 1Point21 Interactive to explore various traffic safety issues involving pedestrians and bicyclists.

In this analysis, we identified two types of pedestrian risk:

1. Areas where pedestrian crashes are most likely to occur.

2. Areas where individual pedestrians are most likely to be stuck and injured.

What Causes Most Pedestrian Crashes in San Francisco? 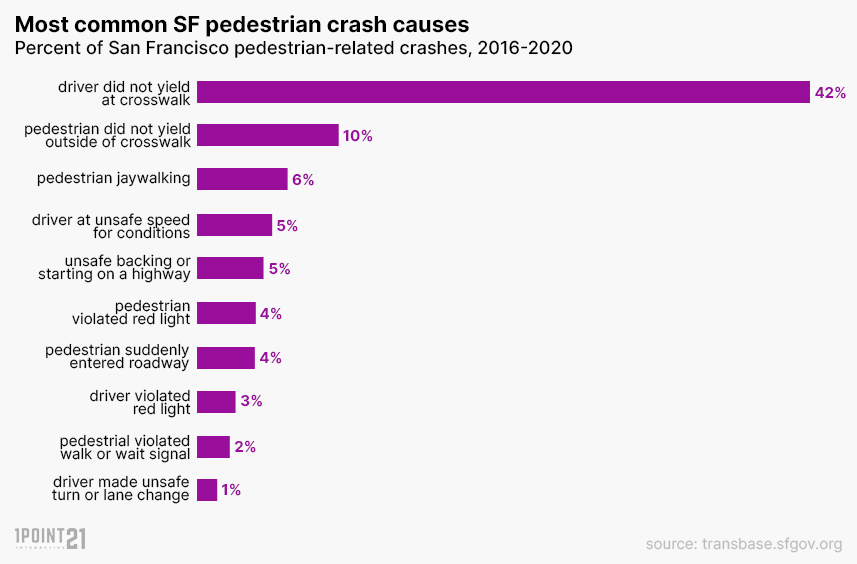 Where Are Pedestrian Crashes Most Likely to Occur?

Neighborhoods Where a Pedestrian Crash Is Most Likely to Occur 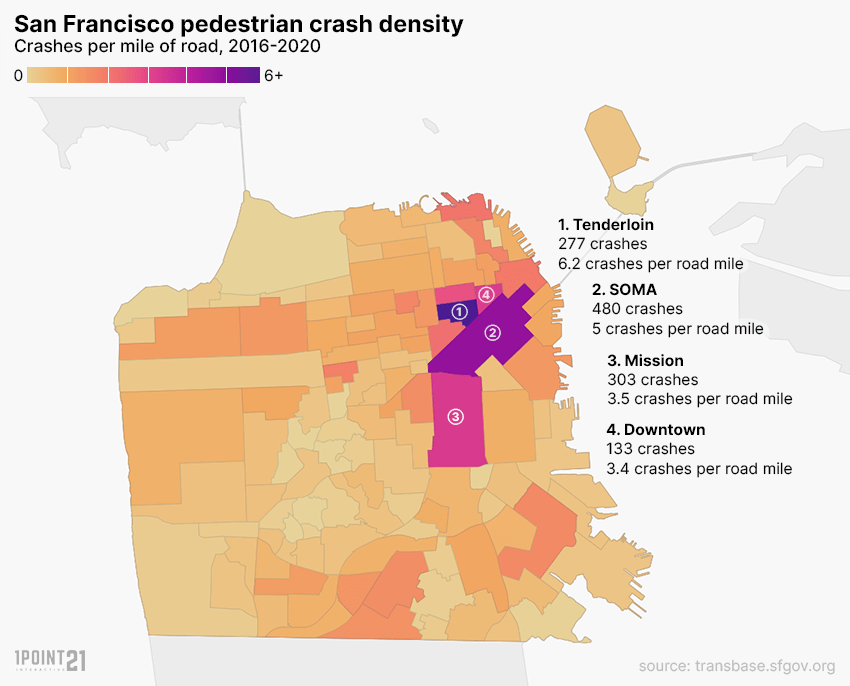 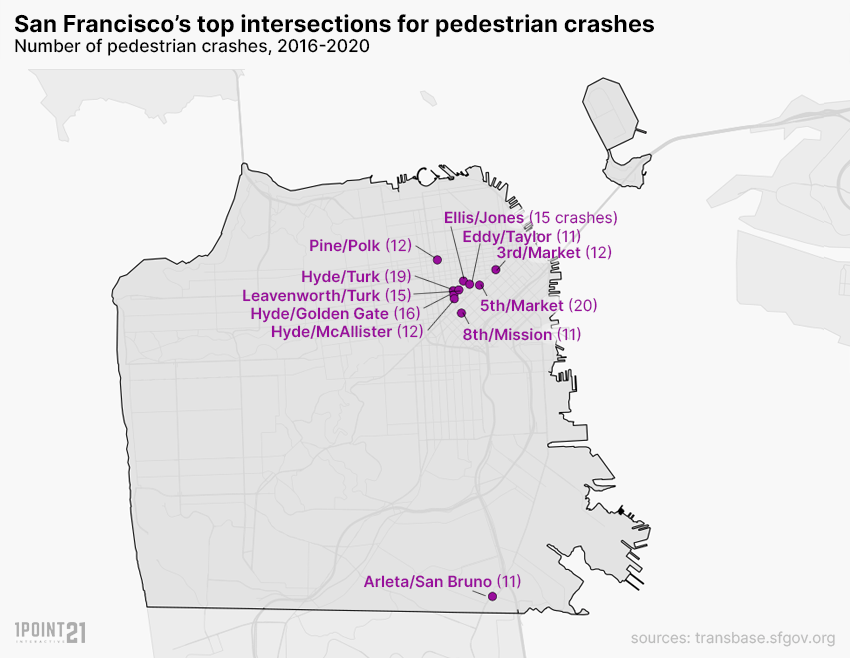 From 2016-2020, the highest number of pedestrian crashes occurred at the intersections of 5th Street & Market Street (20 crashes) and Hyde Street & Turk St (19 crashes).

*Percent pedestrian is the percentage of all motor vehicle crashes at that intersection that involved a pedestrian.
**Ties in total crashes were broken by Percent Pedestrian, then Injuries.

Many of these intersections are particularly concerning, as pedestrian collisions make up a significant percentage of all crashes. For instance, 90 percent of motor vehicle crashes at Hyde Street & Turk Street involved pedestrians. 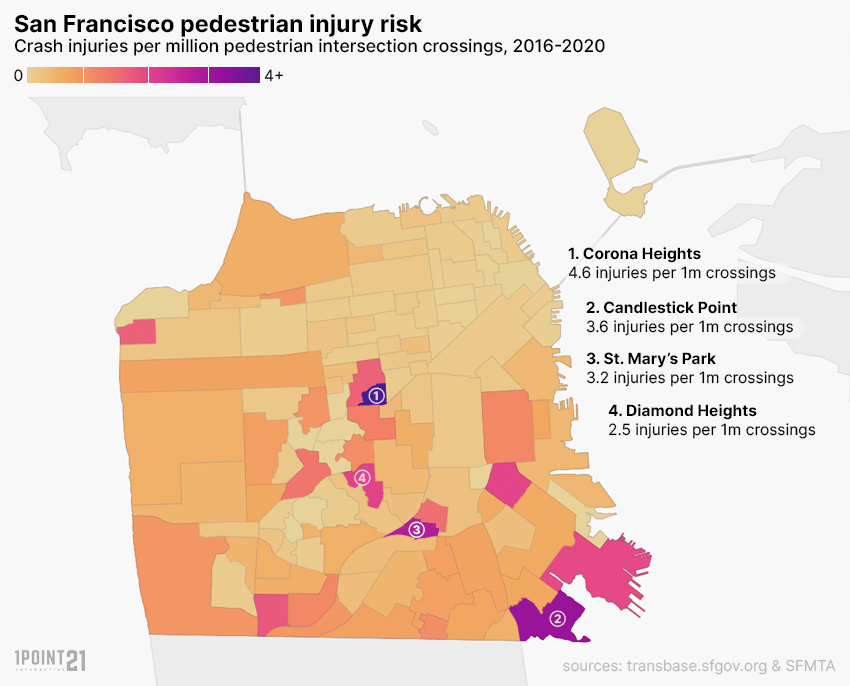 This map shows the number of pedestrian injuries incurred for every million street crossings. It reflects how likely you are, as a pedestrian, to be struck and injured crossing a particular intersection, while the prior chart (“San Francisco pedestrian crash density”) reflected how likely it was that someone would get hit in a general area. We can see here that the risk to individual pedestrians shifts away from the inner city and towards less dense, more residential neighborhoods.

Neighborhoods with the highest risk of collision injury to each individual pedestrian:

When looking at data for specific intersections, the same trend becomes apparent. 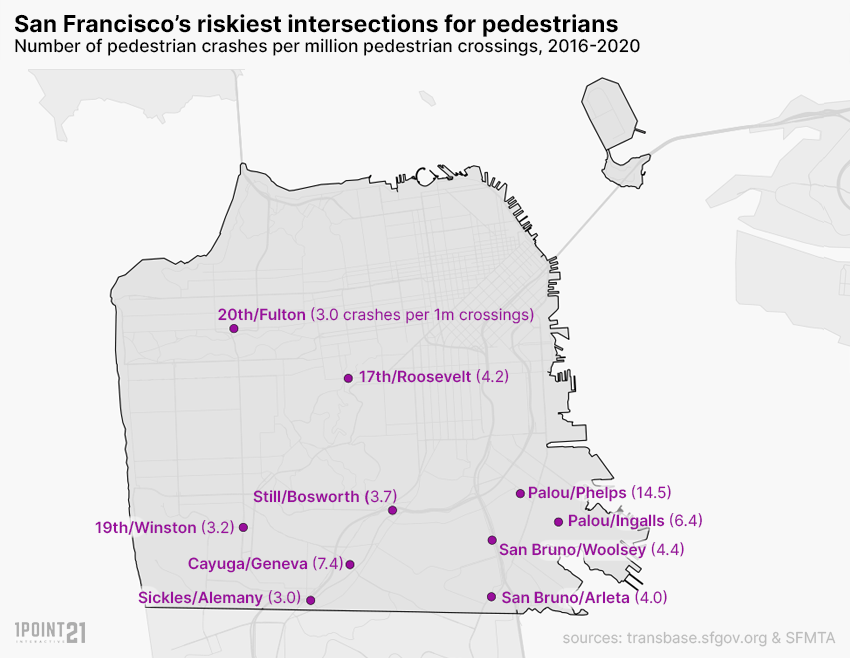 Putting it All Together: The Four Most Dangerous Intersections in San Francisco

While five crashes may not seem like a lot, it is very rare that an intersection ever sees a pedestrian collision. However, the four listed above were well above the average for both metrics.

This analysis makes one thing clear: Pedestrian safety isn’t where it needs to be and the city is more than aware of this. Currently, there are several citywide efforts and multiple projects in progress to improve roadway safety:

For more information about our data and methodology, please contact us.

If you would like to report on or share the results of our study, including the maps and images, please provide attribution by linking to this page. Interviews are available upon request.